As pop culture continues to collide with our political landscape, so has rock and roll, leaving rock boy Y dee snider at opposite ends of the line drawn in the sand.

First, KR… who let it be known, in no uncertain terms, is a conservative, and a big supporter of donald trump. Not a surprise on that front… but what is surprising is the fact that Rock was able to snag a cameo from 45 in a pre-show message, which is… interesting.

The Kid is on tour at the moment… and a new viral video shows that he’s apparently opening his concerts with a pre-recorded message from DT himself, and the kid’s audience is loving it.

Trump begins by saying: “Hi everyone… I love you all. I know you are having a great time at the Kid Rock concert tonight. Frankly, he is amazing. Everyone who attended is the great backbone of our country.” hard-working, God-fearing, rock and roll patriots.” 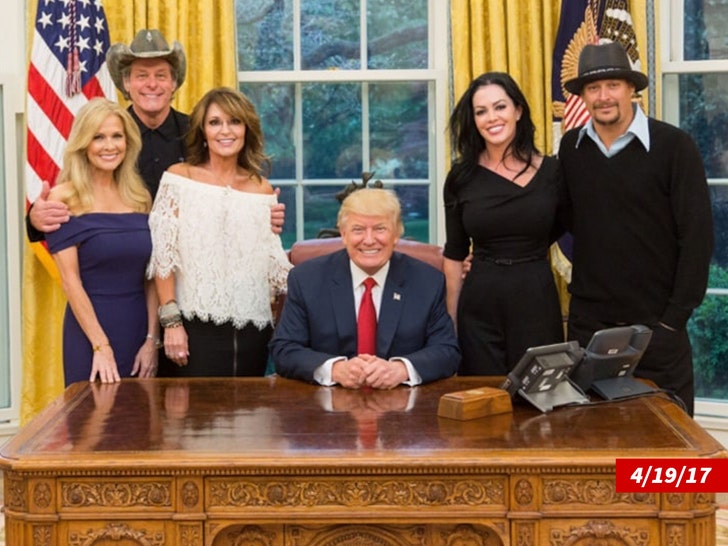 Then there’s Dee Snider… who some in the GOP might have *thought* was a bastion of conservatism, but this weekend the guy himself was hilariously proven wrong.

a republican named Jerrod Sessler — who’s running for Congress — tweeted that he was bummed to learn Dee was behind some liberal policies … even though his Twisted Sister song “We’re Not Gonna Take It” got him thinking that it was something traditional. american values.

It’s unclear why this guy would have believed that the TW tune was somehow a theme song for conservatism, but Dee replied… “Do you think I wrote a song in support of ‘traditional American values’?! HAHAHAHAHAHAHAHAHAHA!! So funny.”

Dee went on to point out some revealing lyrics in the song itself, saying… “The first line of my song is WE HAVE THE RIGHT TO CHOOSE! Can I count you among us pro-choice people? Now that’s a republican”. I can support!”

Sessler responded, becoming a bit holier than you… “Do you think the people who wrote the Bible knew God was writing through them? I doubt it. I think God may even use @deesnider and his hair to always! By the way, nice flag”

Do you think the people who wrote the Bible knew that God was writing through them? I doubt it. I believe that God can even use @deesnider and her hair forever! By the way – nice flag #AmericaFirst https://t.co/kv99tp4SJ6

He ended by saying that they were on the same page on the abortion issue (obviously they’re not) by tweeting, “@deesnider we are in sync! I am totally and completely pro-abortion. I believe that life begins at conception and every baby is born.” You should give him the opportunity to choose.”